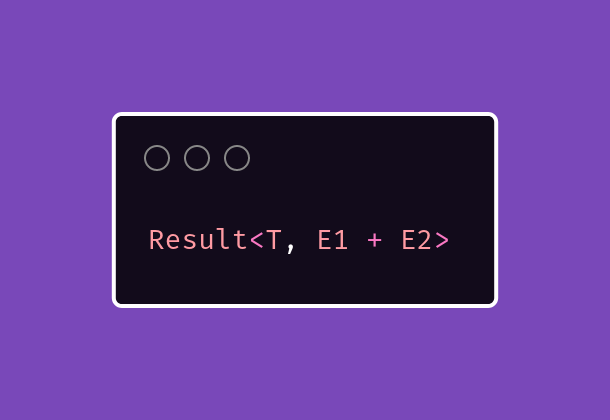 Anonymous Sum Types are one of those Rust features that doesn't exist yet and you either are very familiar with the idea and can't wait for the day an RFC gets approved or... you've never heard of it and think the name sounds as gibberish. Luckily in my experience the transition from the latter to the former is a smooth one!

docs.rs link for those who just want to skip to a code example

Let's break it down word for word. (If you're already familiar, feel free to skip this)

Anonymity, the programming term, refers to a variant of a construct which bears no name. For example, in Javascript you have this little guy:

And, for those who are neither familiar with javascript nor anonymous functions as a whole, you might be confused about what the purpose of a function with no name to call it with! However a function in javascript is an object, which means the above is an expression. So any API which takes a function as a parameter can now take an anonymous function. So you can do the following:

And if you're familiar with Rust, you'll realize Rust has a very similar construct, closures!

I'm sure if you're reading this you're likely familiar with both a sum (as most programmers are familiar with algebra) and a type, but what exactly is a sum type? (also known as a "tagged union" or "discriminated union" or "tagged variant" and probably one or two other things I'm sure)

You might have even used a sum type without being familiar with the overly academic nomenclature of "sum type", let's take at a really common use case in Rust for sum types and, "coincidentally", the topic of this blog post: error handling.

In Rust error handling it has a strong emphasis on returning errors, as opposed to many languages which reach for exceptions. Here is how this difference looks in reality:

In the Java/exceptions version, the addition of error handling does not affect the return type. However, in Rust, you return one of the two types: either CsvFile or io::Error. So, if you think about the actual type you are returning, Result<CsvFile, io::Error> is a type representing the combination of the two types. (Spoiler: this is what a sum type is, more on that in a second)

Let's try doing something similar by hand in Rust:

Now, at risk of over-explaining the concept, let's represent this in a different manner. A type is merely a set of values that allows us to constrain the values we have to work with. Let's try representing bool and u32 as sets:

that means we can represent our type BoolOrU32 as the union of the set bool and the set u32:

Now one thing to consider is that with our BoolOrU32 enum, we are still storing the information which tells us if it is a bool or a u32. This is what differentiates a sum type from a C-styled union. This concept of storing which variant the enum is is the "tagged" part of the other name for sum types, "tagged unions".

To put that all together, an anonymous sum type is an unnamed combination of types.

Taking a look back at our previous example there's a bit of a problem:

While some errors from parsing a file might be I/O related (for example if the file doesn't exist), but some are parsing related errors! We could use io::Error::new(io::ErrorKind::Other, my_error_here) but that's rather verbose to construct, hacky, and it's even somehow an order worse to extract our error type from the io::Error!

One solution to this problem is to hand roll an enum to make a sum type for your error type. This is a really great way of going about things, and is my goto for error handling! It's a great fit for libraries as it allows library consumers to handle only certain errors, or specify error handling by type. It's not very helpful to handle a missing file and an invalid webpage certificate the same way!

However... this introduces a new problem. Internally, you often want granularity as far as your error types. It allows people new to the codebase to see exactly which 2-3 errors a function could return, it allows you to use exhaustive matching to catch more bugs at compile time, etc. However, it's not very appealing to make a new enum for every new combination of errors a function produces. I mean how do you even get past the gruelling process of naming such a type? IoOrParseError isn't exactly what I call a lovely name...

A Solution! (Sort of)

Not wanting to name a sum type? That sounds like a job for... anonymous sum types! This is, admittedly, one of the features I've wanted since I first fell in love with Rust's enums being sum types (in a systems programming language? scandelous!). However, last I checked, bumping every Sum Type RFC with an alt got me nowhere! (Yes, for anyone who is paying attention, I will recycle the exact same joke as from my RustConf talk)

It's time to take matters into my own hands. Introducing some-error!

The idea is simple: use an attribute macro to allow for a very minimal/focused version of anonymous sum types specifically aimed at use in error handling. To use it you just slap #[some_error] on your function, set the return type as Result<T, E1 + E2 + ...> and you're good to go! You can even use ? for any of the included error types.

The Man Behind The Curtain

In Rust, you can return trait objects, for example:

Where dyn Any + Send + Sync can be any object which can be any type that implements Any, Send, and Sync, the same single function can even return any number of types, so long as all of those types implement Any + Send + Sync. Tiny bit of Rust history, but before Rust 2018, the syntax for this didn't include dyn:

And since this still parses in spite of being deprecated, that means we can use it for our own nefarious macro purposes! ()

Unlike the function itself, matching on the anonymous sum type requires no macro. That means this time around we can't cheat! Everything must be above board or rustc will give me a slap on the wrist. Although, I can't quite say I got out of the macro hackery unscathed, rustc punished me with a bit of ICE for my crimes.

This time, I abuse a lesser-known Rust fact that Rust functions and modules exist in different scopes, allowing you to make them overlapping:

And, similarly to traits and derive macros, this allows you to import both at once:

which gives the illusion that the function can have associated constants, types, functions, etc.

This part is rather easy! One really wonderful feature of Rust is that the ? operator will automatically coerce from Result<T, E1> to Result<T, E2>, given E2: From<E1>. Meaning all we have to do is generate some trivial From implementations and voila! Now any part of the sum type can be returned using ?.

One problem that occurred while making this is that, unlike a normal enum, the variants can't really have identifiers as names. Since it's a common pattern in Rust to refer to errors in the form of module::Error (such as io::Error or fmt::Error), the variants need to be paths (as I don't really consider any form of normalization such as IoError to really be an appealing solution).

So how can we go about this? Since we're already using a macro anyways, we might as well make the most of it! Let's just generate modules to emulate the paths and then re-export the individual variants of our error type!

Wait What Do You Mean "Sort of" a Solution?

Welllllllllllllll. While I am rather happy with how far I was capable of pushing what is possible, I can't say whether or not I actually like it. I haven't been able to extensively test it as I started writing the library a day before writing this. Perhaps this results in a lot of problems! Maybe those problems are all solvable by language-level support of anonymous sum types. Maybe someone else needs to "yes and" this idea before it is actually truely useful. I can't say!

My goal here was not to make The error handling library, but rather to explore a new design idea. And possibly to give people something to play with to find sharp edges to motivate a language-level implementation.

You're free to use some-error in your projects, and I will certainly maintain it to the best of my ability, but I guess what I'm trying to say is please don't flame me on reddit just because this library isn't going in anyone's million LOC codebase.